Two years after setting off into the hills, the grandfather of four only has eight of Scotland’s Munros to climb.

Sky News reports that an 82-year-old man is just eight peaks away from completing his challenge of climbing the peaks of Scotland’s 282 Munros.

Nick Gardner said he was “knocked for six” when his partner of 50 years, Janet, had to be moved into a care home after she developed Alzheimer’s disease and osteoporosis.

So the grandfather of four set off into the hills in July 2020 in order to do something to keep him going.

Now, around two years on, he only has eight Munros left to climb. “When Janet went into care it absolutely shattered me,” he told the PA news agency. “We were incredibly close as a couple, she was the most wonderful and caring wife, mother and grandmother possible, and now she doesn’t recognise me. “I was heading into some mental condition, so I thought I have to get myself a challenge, to pull me out.”

Having never climbed a Munro – a Scottish mountain that reaches a minimum of 3,000ft (914.4m) – the former physics teacher gave himself 1,200 days to complete the challenge while raising money for Alzheimer Scotland and the Royal Osteoporosis Society (ROS).

With his final summit planned for about two weeks’ time, Mr Gardner is on track to finish much earlier in under 800 days. “I am so close to completing it, I really feel like a child in the run-up to Christmas,” he said, “I have butterflies.”

He will have walked 2,000 miles (3,218km), a similar distance to hiking from Edinburgh to Greece. Mr Gardner said he is never truly alone during his climbs.

“I am over 80, and I think it would be irresponsible to climb on my own at this age, so I always have people with me. “I don’t climb in a
rush, and after the first two or three Munros I just started stopping people on the hill to tell them what I was doing.

“People couldn’t believe it, and they started joining me and donating money. “Now, when I am walking, I regularly hear, ‘Nick’ shouted. “One man came up to me and said: ‘Nick, excuse my language, but you’re a f legend’. “I don’t normally get sworn at like that.”

For the last, the 282nd summit at Cairn Gorm in the Highlands, he will be joined by friends and family for the final climb. Mr Gardner’s target was initially to raise £10,000, but he is now on track to reach £50,000. 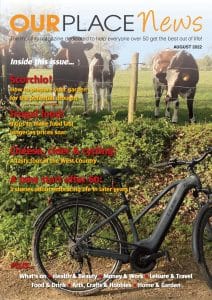