Fame was never easy for this pop icon, and now she devotes her time to helping others cope with the double-edged sword of success.

She was once known as pop’s ‘barefoot princess’, but 50 years on from winning the 1967 Eurovision – which turned out to be, at best, a mixed blessing- Sandie Shaw is now happy to spend her time helping people in the arts coping with the pressures of fame.

No one would seem to be better qualified for such a role than Sandie, who was catapulted to fame at the age of 17 only to find herself, some ten years later, working as a waitress to pay off her debts. She has known personal heartache and professional disappointment, not to mention stage fright, depression and a car accident that nearly killed her, but Sandie is nothing if not a survivor, and as recently as 2012 she was touring with Jools Holland and, three years ago, making a record with Massive Attack producer Neil Davidge.

She was born Sandra Goodrich and after leaving Grammar school went to work at the Ford car factory in her home town of Dagenham, where she was employed as a trainee computer operator.

Crammed with other novices into a tiny room with massive IBM machines, Sandie only lasted six weeks, leaving because, as she put it “I wanted to be a star”.

After some part time modelling Sandie tried out as a singer and came second in a local talent contest. Her prize was to take part in a charity concert in London, where she was spotted by pop star Adam Faith who in turn introduced her to his manager, Eve Taylor.

Eve gave her the catchy, punning stage name of Sandie Shaw and won her protégé an audition with Pye Records, a label with some clout at the time, thanks to a roster of artists that included The Kinks and The Searchers.

On a visit to the United States Eve had heard Lou Johnson’s version of a Burt Bacharach/Hal David song, (There’s) Always Something There To Remind Me, a minor hit at the time, and thought it would be perfect for her new client.

Her instincts were correct and it led to the top of the chart in September 1964, where it stayed for three weeks.

With her trendy bob haircut and fashionable clothes, Sandie was soon a regular on TV shows like Ready Steady Go! and Thank Your Local Stars, where her ‘gimmick’ of singing barefoot soon endeared her to audiences.

Sandie later explained that the only reason for singing barefoot was that she had size seven feet and could only find size six shoes, and wanted to be comfortable when performing. It didn’t hurt though to have what would now be called a ‘unique selling point’. A second Number One, Long Live Love, in May 1965 written by her now regular songwriter Chris Andrews (who also had a big hit in his own right with Yesterday Man), and Sandie’s popularity was also spreading across Europe thanks to her regularly recording French, German, Spanish and Italian language versions of her singles.

By 1967, however, sales were staring to decline and Sandie was, in her words “bullied” into exploiting her pan-European popularity by becoming the UK’s entry for that year’s Eurovision Song Contest. The BBC had been attempting to win the contest for ten years, and it was becoming an embarrassment that such a major exporter of pop could not come up with a winning entry.

Sandie performed five songs on the Rolf Harris Show and was horrified when the public chose Puppet On A String, written by top-rank songwriters Bill Martin and Phil Coulter. “I hated it from the very first oompah to the final bang on the big bass drum,” Sandie said later. “I was instinctively repelled by its sexist drivel and cuckoo clock tune.”

Things didn’t get any better on the flight to Vienna, where the contest was being staged. Sandie, who was 21 at the time, had been named a co-respondent in a divorce case, and some BBC executives had wanted her fired from Eurovision. “They didn’t think it was the right image and so it was incredibly unpleasant. I had to hold all that in when I was singing.”

Despite her misgivings, Sandie performed the song flawlessly, but after being announced as the winner was so exhausted that, after being locked out of her hotel room. “I just lay down in my fur coat with some champagne and fell asleep. I didn’t feel like celebrating to be honest. It was a horrible song… but it was really nice to win and represent Britain.”

On the back of her Victory Puppet On A String sold more than two million copies provided Sandie with her third chart-topper and briefly gave her career a shot in the arm, enabling her to front a TV show The Sandie Shaw Supplement and launch her own fashion label the following year helped by leading designer Jeff Banks (a presenter of The Clothes Show in the Eighties), who she married in March 1968.

It all proved short-lives, as the hits dried up after the 1969 Monsieur DuPont and a curio of a covers album, Reviewing The Situation, which mixed numbers by Lionel Bart and Donovan with Led Zeppelin and Bob Dylan songs.

Sandie gave birth to a daughter, Grace in 1971 but by the end of the decade her marriage had ended, the couple having gone through financial difficulties due to the collapse of Banks’ business, and she ended up working as a waitress for a while. “No one recognised me,” she said.

Redemption came in the unlikely form of The Smiths, whose lead singer, Morrissey had declared himself to be an “incurable Sandie Shaw fan,”. They collaborated on a single, Hand In Glove, written by the band, that returned her to the charts and a Top pf the Pops appearance, memorably backed by The Smiths with their shoes off. There was also a tour, but after that Sandie retreated from the business once more and in 1994 qualified as a psychotherapist.

“I spent my 30s recovering,” she says. “and then my 40s beginning to enjoy life. When I worked with the Smiths, he really expected me just to run with the ball, but I wasn’t ready. I couldn’t do it. I was still in shock and traumatised from what had happened before.” Wanting to understand how people end up behaving badly prompted her take up psychotherapy. “I had seen people do terrible things and I was always asking why people behave like this. And then I found out. It is complex reasons. It is humanity. It is how we are. We don’t realise that life is fantastic.”

At her practice- Barefoot Therapy, what else- she was originally known by her married name, Sandie Powell, but is now happy to trade under the name Sandie Shaw. (Sandie married Nik Powell, co-founder of Virgin Records, in 1982 and they had two children together; she is now married to Dr Tony Bedford).

She now devotes her time to helping people in the arts cope with everything from the pressures of fame and stage fright to alcoholism and writer’s block.

Just occasionally, however, Sandie has been drawn back to relive her past. In 2010 she performed at Vintage at Goodwood, a celebration of 50 years of British creativity, her first concert in more than 25 years, and in 2012 she toured with Jools Holland and his band. But a near fatal car accident in 2013 finally prompted Sandie to retire from singing, and to release a compilation album as “part of me saying goodbye”.

More recently she reflected on her so called ‘retirement’: “What I really meant was I wanted to wipe the slate clean of my pastmusic, style, trends. I waned to reflect who I am now. It was not so much an end as a beginning.

“I’m grateful to have survived. I’ve learned there had to be a middle ground if you’re going to get anything done. When I toured with Jools I didn’t know if audiences would like me. I was petrified. It was something I hadn’t done since the Eighties. But then I thought if I don’t try it I will never know. And I realised I was a great performer.”

Sandie is now happy to take each day as it comes, be that running her clinic, doting on her four grandchildren, or just watching the world go by. “I love experiencing the weather, the seasons, I love planting trees at my home in Oxfordshire with Tony. I have whole days where I ‘pretend’ to get up- changing out of my nightie, showering, brushing my teeth- and into a ‘day’ nightie in which I stay all day. “I paint portraits of my family and have my own artist’s studio. Growing old is amazing. I still sleep in my makeup, don’t exercise and never have time to do things like enjoy facials. I guess enjoying yourself helps. Most of all I do things that bring me joy.” 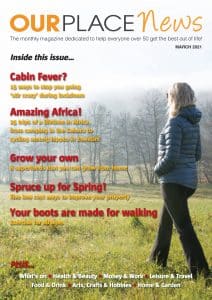